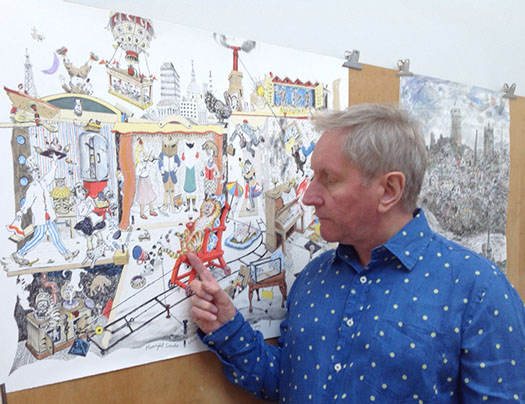 Chris Orr has had numerous exhibitions throughout the world which include: ‘The Complete Chris Orr’ (touring show), 1976; ‘Many Mansions’ (touring show), 1990; Six Royal Academicians in China’, shown in Beijing, Shanghai, and London,  2005; ‘LithORRgraphy’, Royal Academy, Fine Rooms 2012. ‘The Miserable Lives of Fabulous Artists’ Royal Academy Keeper’s House 2018. He has had regular solo shows with the Jill George Gallery and the Brook Gallery. He exhibits annually at the Royal Academy Summer Exhibition and the London Original Print Fair.

Besides being with numerous private and corporate collectors his work is to be found in public institutions including The Arts Council of England, The British Council, The British Museum, The Government Art Collection, The Palace of Westminster Collection, The Ruskin Library at Lancaster University, The Queens Collection, National Portrait Gallery, Royal Academy of Arts, Science Museum, Tate Britain, and The Victoria and Albert Museum.

Chris Orr is a narrative artist whose work ranges across a variety of subjects and ideas. He has a fascination with the physical and social nature of the modern city. His investigations lead him all over the place from London to Shanghai via New York, and back through Naples. He paints and draws on location as well as in the studio.  His work is packed with observed detail and incidents. He engages with contemporary life and a sense of how the past has shaped us.  He has been described as a social surrealist. What may start as a mundane observation can blossom into something very different. Those who collect his work, and there are many, talk of a life-long engagement with the world contained within his pictures.

Chris started making prints in his twenties, and discovered the power of the multiple to communicate. A medium like etching consolidated his drawing. Lithography was a process that offered wonderful new freedoms. Recently, silkscreen and engraving have begun to play a big part. Printmaking is a way of taking his thoughts into a published public domain. The relationship between printmaking and books is very strong. The print is like a page and in much of his printed output there is a hidden text. He invites people to 'read' his work as well as to look at it.

A flat printing process that depends for the definition of the printing area on the chemical antipathy of grease and water. Artists usually draw directly onto metal plates or finely ground limestone blocks, using grease-based materials.  In commercial use nowadays lithographic images are usually generated through photomechanical means. The original process was invented by Aloys Senefelder in Austria around 1796.

The work is printed directly from the stone on which it has been drawn by the artist, giving a wonderful veracity from the image to the print although in reverse.

The image is transferred from the inked plate onto an intermediary surface, which is then printed onto the paper. The result is the same way around as it was drawn on the plate.

A process in which ink is pressed through a fine mesh, the design being either a positive or negative stencil. Developed in the early 20th century, it was initially used for the printing of designs on textiles.

Printing from a raised surface that has been rolled with ink. Examples include wood and lino blocks. The oldest method of printing.

The Artist draws with a sharp instrument onto a metal plate covered with a waxy ground. The plate is then etched with acid, which bites only into the exposed metal to create grooves into which ink is rubbed. When the inked plate is passed through the rolling press against a sheet of softened paper, the pressure squeezes the paper into the grooves collecting the ink to form the printed image. Tones may be created by aquatint, a fine dot structure of fused resin.

A method of making an intaglio print by incising the lines directly into the plate. Traditionally this was copper, but nowadays   industrial plastic can be used, which is both economical and durable. Tones can be obtained with a variety of grooved and serrated tools.

The number of impressions taken from one printing plate or stone and signed by the artist. The size of the edition and the unique number of an individual example is usually indicated by the artist in pencil on the print. For instance, ‘14/50’ indicates that a print is the fourteenth impression from an edition limited to fifty. The Artists’ signature authenticates the print and the edition. ‘A/P’ indicates that the impression is an artist’s proof, outside the main edition.

Original prints, as opposed to reproductions, are supervised or produced by the Artist and each print is signed and numbered by the Artist. The number of copies taken may be a commercial decision, or limited by the durability of the process. For example; copper plates wear through the abrasion of printing and lithographic chemistry may be subject to changes that allow only a finite number of copies to be taken.